THE Henty Machine of the Year Award has been at the core of the field day's philosophy of showcasing innovative national and international agricultural engineering.

For 45 years, the award's judging and presentation has drawn interest from farmers nation-wide and the title is considered the most prestigious on the field days circuit. A multi-purpose fertiliser spreader and chaser bin offering increased productivity and year round flexibility has won the award last year.

The Coolamon Spreader Chaser, entered by Coolamon Chaser Bins, Coolamon, NSW, impressed judges with its innovation, engineering and design. The Henty Machine of the Year Award made its debut in 1974 when the field days were held on a farm fronting the Olympic Way, south of the township.

That year, secretary Doug Meyer described the field days as one of the biggest agricultural events ever staged in southern NSW and northern Victoria. The award was aimed at promoting and developing efficiency in agricultural fields, resources and methods, and encouraging greater harmony and understanding.

Tractors were excluded from entry right from the beginning, and the machine had to be released on to the market in the 12 months preceding the field days. Chaired by Brocklesby farmer Len Schilg, the judging panel comprised field days cooperative members, who were representative of consumers experienced in the selection and use of farm machinery. 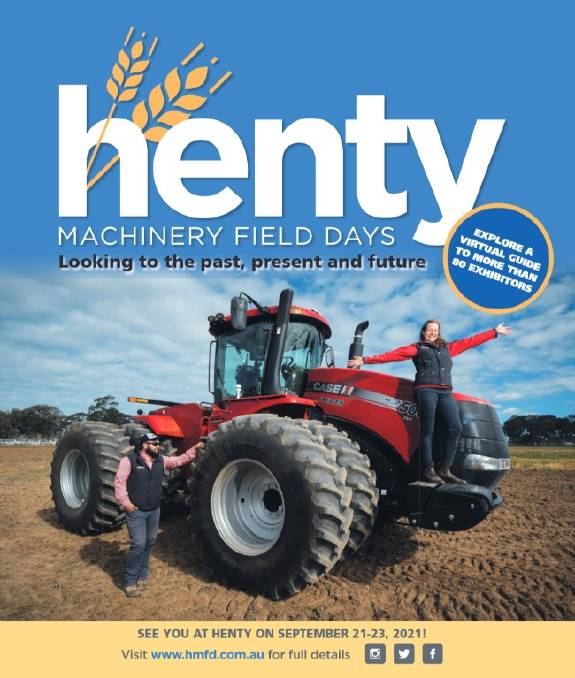 View more than 80 exhibitors in a virtual guide of the field days in an ACM special publication - Henty Machinery Field Days: To the Past, Present and Future. Click the image above to view.

They had to be not staid in their selection to any one particular company, and were given access to advice from technical experts and agricultural engineers. The winner earnt the right to sell their machine under the title of 1974 UFWA (United Farmers and Woolgrowers Association) Henty Machinery Field Days Machine of the Year.

Judging has always taken place on the Monday, or "bump in'' day, when exhibitors set up their sites. It was a points system based on purpose and suitability, scope of application, durability and simplicity of design, availability of spares, and ease of maintenance, service, adjustment and operation. Traditonally, the award was announced on the first day of the field days, during the official opening.

One of the early winners was displayed by a US hay and forage equipment company called Hesston, which was bought out by AGCO Corporation.

In 1974 the popular Gadgets Competition, sponsored by The Weekly Times, had been a mainstay of the program for several years, and drew farm inventors from across the state.

The Land's machinery writer, Neil Lyon, wrote in 1989: "All have certain features in common - they are all labour saving, technically advanced and aimed at providing extra efficiency in the work place.''

New Holland's Model 850 round baler was the Machine of the Year in 1976. The following year, Cookardinia farmer Laurie Sone was appointed chairman of the judging panel, a position he held until the 1990s.

"New features unavailable on any other existing machinery of that type or an entirely new concept are some of the criteria being looked for by judges,'' Mr Sone said.

In 1989, the entries lining up for the Award included a "jet 'n dip'' sheep handler, hay rake and stacker, and a stump "eater''.

The Land reported at the time one invention sure to attract attention was the Universal Systems Plough manufactured by Lehmann Australia. It featured a specially designed Lehmann drawbar and a patented roller bar attached to the main frame. 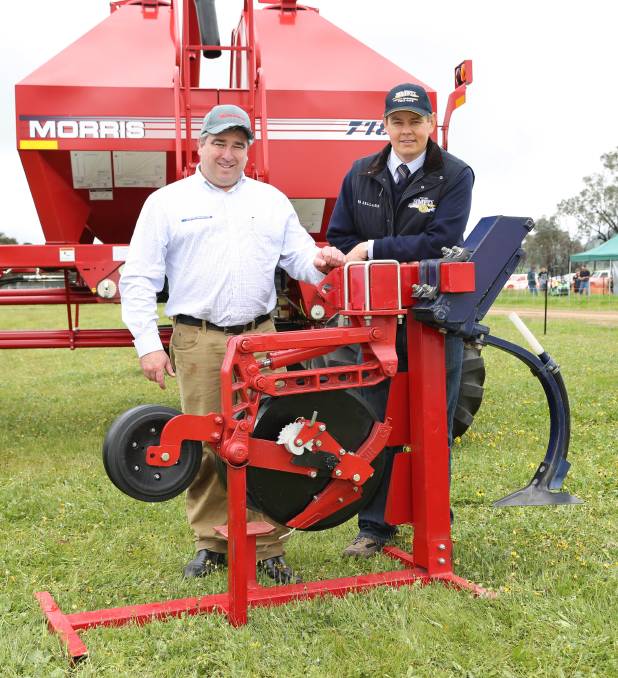 Michael McCormick, Morris Industries, and HMFDs Matt Bergmeier with the RAZR Disc Drill, voted the winner by a panel of regional primary producers as the field days 50th anniversary in 2013 following a solid nine hours of judging.

The Albury engineering company had spent two years developing the plough as an answer to soil aeration and drainage problems faced by farmers. That year, the CLAAS Quadrant 1200 super baler made its Australian debut at Henty and was a star entry in the awards.

Wellington based tillage equipment manufacturer, Agroplow, took out the 1990 award with the versatile Modular Drill.

Chairman of the judging panel Laurie Sone said a wide range of points and fittings gave the unit a range of functions from conventional cultivation and seeding to direct drilling.

In partnership with the Tractor and Machinery Association (TMA), HMFD introduced a new award in 1995 for the best Australian manufactured item of commercially available agricultural machinery, preferably from NSW.

The new award would provide visitors and overseas buyers a look at some of the best machinery Australia had to offer. Presenting to the judges in 2003 was the Electric Drive JPC 200 Agrowdrill, Polaris ATP, Frahn Engineer's grain cleaner, Gason's MiniTill Hydraulically Controlled Seeder, Landini Vision tractor, Little Aussie thrasher, Magnetic

The 2017 award featured one of the widest drills on the market, the 3420 PHD Paralink Hoe Drill which was debuted by Canadian manufacture Bourgault to Australian farmers at Henty.

The 24m wide drill impressed judges with its unique folding mechanism, with the wings able to be folded and unfolded in three-and-a-half minutes for transport.

In modern times, 2016 and 2018 proved to be boom years for entries with a total of 24 machines vying, rising to a record 34 in Henty's 50th year of 2013, for the coveted award, proving innovation is alive and well.